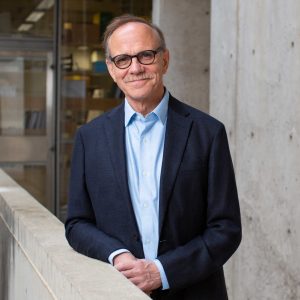 Rusty Gage was named President of the Salk Institute in 2019, where he has been a member of the faculty since 1995. He is a professor in the Laboratory of Genetics and holds the Vi and John Adler Chair for Research on Age-Related Neurodegenerative Disease. He concentrates on the plasticity, adaptability and diversity observed in the brain. He showed that, contrary to longstanding dogma, the creation of new neurons (neurogenesis) does occur in the adult human brain and that environmental enrichment and physical exercise can enhance this growth. His lab demonstrated that neural stem cells exist in the adult hippocampus and can give rise to neurons that are physiologically active.

In addition, Gage discovered that moveable DNA sequences dubbed mobile elements are active during neurogenesis and lead to genomic mosaicism (being composed of genetically different cell types); this genetic variety may contribute to the brain’s diverse functions.

In 2018, a team of Salk Institute researchers, led by Gage, received $19.2 million from the American Heart Association-Allen Initiative to analyze the interactions between proteins, genes, epigenetics, inflammation and metabolism that underlie the aging brain in health and disease. The goal of the project is to investigate the mechanisms of cognitive decline and Alzheimer’s to identify new therapies and treatments.

Gage’s lab currently models diseases in the laboratory using human stem cells. By reprogramming human skin cells and other cells from patients with neurologic and psychiatric diseases into induced pluripotent stem cells and induced neurons, his work is deciphering the progression and mechanisms that lead to disorders including Alzheimer’s disease, Parkinson’s disease, bipolar disease, schizophrenia, depression and autism.

Gage received his BS from the University of Florida and his MS and PhD degrees from Johns Hopkins University. He is a fellow of the National Academy of Sciences, the National Academy of Medicine, the American Academy of Arts and Sciences, and the American Philosophical Society. Gage is the recipient of numerous awards including the Keio Medical Science Prize, the Christopher Reeve Research Medal, and the inaugural International Society for Stem Cell Research Achievement Award in 2020.